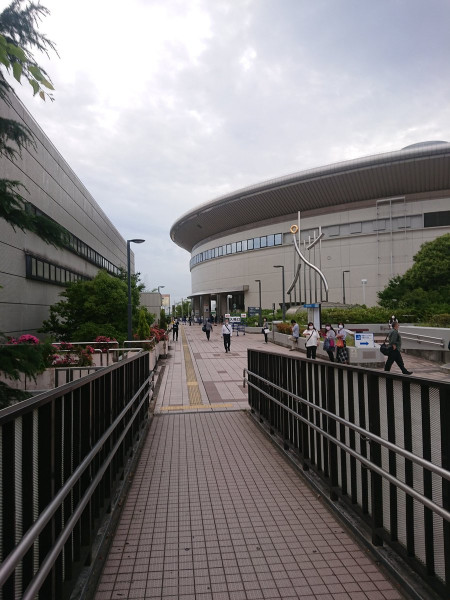 Me waltzing into the venue 5 minutes before showtime lol Unlike previous years where everyone could go in whenever, this time due to covid19 there are proceedures to follow... one being, everyone got a designated time to enter the venue... On Tuesday I got between 5:00-5:30 and today I got 5:30-6:00 to enter... me being me, went in last minute ><'

About this today's ticket, I only found out about it on Monday! Last weekend the FC sent out a mail for a second ballot and I applied not thinking I'd actually win BUT I DID!!! I'm really glad I was able to see KAT-TUN twice in a week... twice for this tour ;)

if you had fun hands up!
Hyphens:

y'all were listening to me lol

During MC, talks about how they spend their time between shows;

Ueda: beer in room and something else. Ueda talks in slang so I didn't catch it (sorry) lol

Nakamaru: hitsumabushi (eel on rice) he went out for 'morning' it's like a special breakfast service at cafes in this part of Japan. Hitsumabushii is a full meal. Very heavy. So Kame was so surprised and asked, 'in the morning?' Nakamaru said yes, just a small portion.

Kame: After concerts he would usually take a bath and watch a movie. Today he went to the pool at the hotel and relaxed looking at Nagoya Castle. He said that was the moment he truly felt like he was in Nagoya...

And then Nakamaru cussing Ueda about his bad mouth then turns to Kame to get Kame's backing but Kame shrugs it off saying it's the usual while Ueda tirelessly defends himself saying it's not abuse it's love lol He looked so cute saying this, almost shy and everyone was just laughing at his cuteness lol even Nakamaru was surprised by his answer. They talked about Ueda's personality changes lol I swear, I could never love another 3 as much as love them <3

And I'd mentioned Ueda's pinkish eyeshadow last show. Well this time he still had it on... the same shade as that in the 15th anniversary logo and today I noticed that he shaved the lower right side of his head ! 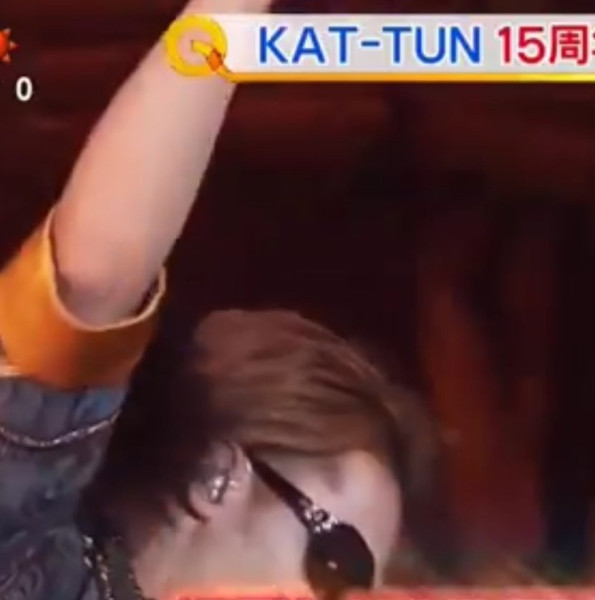 Adding to his tattoo and pink eyeshadow, now shaving his head. He really sat down and came up with a self presentation.. but I guess he's always done this for concerts if we consider him painting a butterfly on his face.

And Tengu KT were obsessed with Kamen Rider tonight.. reminds me of my Power Rangers obsession as a kid. Kame pulled down his masked fully only leaving out just below his nose. When Nakamaru asked him what's the deal, he pointed to himself, laughed and answered, "This is my Real Face" lol.. then he went on to explain how he resembles a kamen rider chararacter... and when Ueda and Nakamaru weren't paying him much mind he actually went backstage for his phone then came back and showed them a picture like an excited kid lol I think he went on wiki or something lol

During that segment they also teased the shit out of a junior.  I think the junior's favourite kamen rider is also Kame's favourite so Kame said he'll marry him.. then told him he should bring his father to Fukuoka... then for some reason, they just started asking the same junior what he thinks about KAT-TUN... saying 'we're scary, right? but we're in your care' and when the guy, probably surprised with the spotlight suddenly on him, wasn't answering, Ueda got loud 'Yo! it's your sempai talking to you!' lol but then everyone laughed and they got back to singing since time was running out lol They finished the segment with D-Motion, each of them acting out a kamen rider haha *real crackheads* lol

I saw on twitter that it was probably this kamen rider kame showed them on his phone. And to finish it all, in his final message Nakamaru said that even though we couldn't shout as usual, there was so much energy that he could hear our silent cheering. Everyone started clapping ☺️☺️☺️
And finally, this year at the WE ARE KAT-TUN there was no confetti falling from the ceiling. While from my seat I woudn't have gotten any, it's always a beautiful sight to end a beautiful moment. All in all, I'm looking forward to the next concert with fingers-crossed that things will be back to normal XD
Tags: concert reports, kat-tun, kat-tun forever lol, we are kat-tun
Subscribe