Maybe they should just move in together lol

I might've said this before but what I love about Tame Tabi is that they give us another window to view KAT-TUN through. It's fun seeing them sometimes slip into those candid moments be it with their body language or the things they say... the glances they give each other or just how much they know each other and think about each other.

It's quite a treat.

I really enjoyed this house hunting episode. One thing for sure, they would love to one day buy a house and Kame sees Ueda having kids and he and them working out in their gym...

Kame: Ueda can make this area into a gym for him and his children.

Ueda: yeah, for sure

The imagery is a mood😚😋 pic.twitter.com/kmztFpI515

Kame wants a house with a yard to practice his pitches and drink coffee on the patio on a chilly day and maybe Nakamaru is already looking into real estates... I mean, his guesses were actually close.

I don't mind them moving in together ! lol but that that would never work

I still laugh at this moment here~

Maybe he was hungry lol I also remembered how they called him out last ep for eating all the food~ for a tiny guy, his stomach is bottomless lol

And a lil moment of them laughing together and then the zoom in on Kame... it's really cute and his reaction after was a bit curious, I feel XD

It's no secret that I've been a long fan of Kame x Nakamaru for years now. It first started out as a Koki >>> Kame>>> Nakamaru chase but also, it's always how Kame is ALWAYS trying to get Nakamaru's attention and recently, all these years of Kame's persistence seems to be paying off as Nakamaru is now really into the touching...

Kame and Nakamaru have always been close... I guess it's special how they went to the audition? or rehearsal? together~ they'd met each other by pure chance trying to find the location... and then years later they ended up in the same group. That's something like fate, right?

But not only that, Kame has always held Nakamaru in high regards calling him someone close to his heart and even though Kame is younger, Nakamaru always looks up to him... maybe... in a way, Kame loves Nakamaru's work ethic (and I keep remembering that scene from the Ride Alive documentary of Kame watching Nakamaru work)... plus, Nakamaru probably sees something in Kame~ perhaps, Kame's fearless approach to work~ so in that case, maybe. I really don't know.

Okay, that got deep so let me drop in a cute Kame *~swoooon*~

And this bit here~

I believe he mentioned it 2 or 3 times in this single ep!

And this part here cracked me up lol

So apparently, Ueda and Kame love this house but both claimed not having enough money so TnK called in 'the bank' lol but from the look of them KT immediately became sceptical because these men are clearly the 'yakuza' and everyone knows it's never good to accept their 'loan'.

This part also had me cracking up!

TnK: the layout/view is somewhat american-like

TnK says the place look like an American neighbourhood so Kame suddenly got himself an imaginery neighbour named, Jack lol 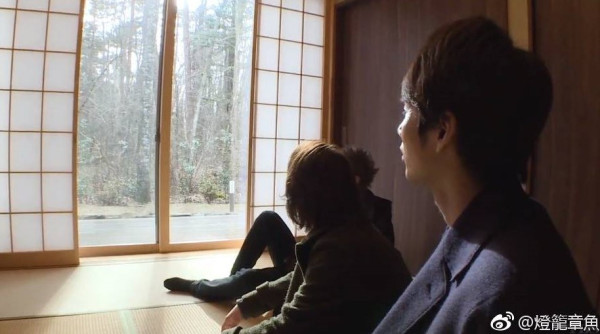 Really, these three together is my zen moment <3