Tame Tabi in Sendai (Oct 26, 2018) !
This first part of Tame Tabi was funny lol Well to tell the truth, I still don't get this Ikemen Janken game (as in I get the theme to which they need to do the 'paper, rock, scissors' action to---- but).... anyhow, what I enjoy, is watching them compete and show parts of themselves we've never seen before. It's amazing what they'll think up and do just to eat lol

And remember how last episode, Nakamaru complained about TnK asking him to beatbox then stops him even before he starts? Well this time, he got his chance to shine XD

Seems like he also performed this bit at the Sendai cons ;)

And Ueda was in the mood

The energy is real lol
This time around, they really seemed like TnK's 3 children... the way they pouted when they couldn't eat and how they pretended to they weren't in Sendai for an Ikemen Janken Bus Tour and TnK always having to remind them lol

But let's start with Kame and TnK's baseball chat...

I like how Nakamaru and Ueda knew this moment was coming but they still quietly gave it a chance but...

Kame was really caught up in his baseball chat with TnK and lol at Ueda... you can see him boiling... I think they were hoping these small gestures would alert Kame and TnK of how long they'd been talking but lol

Ikemen Janken 1:
It's when KT started behaving like brats... pretending they didn't know they're on a ikemen janken bus tour lol

Reminds me of when my siblings and I try to con our parents into getting something without working for it haha
I LOL when TnK called Kame an 'idiot' for purposely making wrong guesses about why they're n Sendai.

But this ikemen janken was so predictable!
I love how the girl found Ueda's hair cool even before he entered the shop and she saw him up up close XD
I guess it really stood out in the crowd.

But who expected this killer attack from Nakamaru? haha
I like how she kept saying he was close... poor girl could hardly contain it.

And then she experienced heaven on earth with this magic touch 😂
I really really love how Ueda touches the head of women... I also noticed it in his last butai... like this; 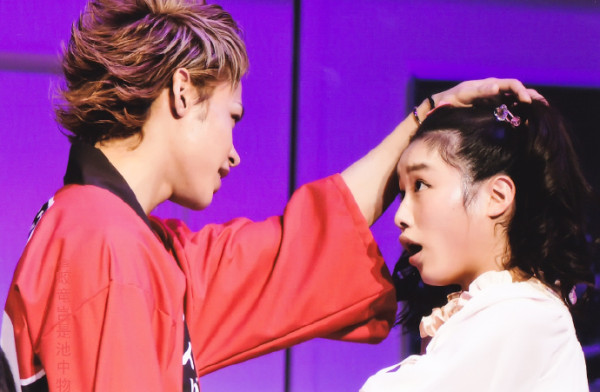 It's very soft and tender ;)

Kame doing the cutest shit ever! This girl's heart is stronger than all hearts <3

Should I give spoilers as to who won?

Ikemen Janken 2 -
I lol-ed at how they were quick to select the doughnut flavour they wanted to try only for TnK to damper it all..
This was also predictable... this one is such a typical 'mature' Japanese woman so I could tell exactly who she would select.

And oh goodness!
LOL remember what I said up top about seeing parts of KT's character that you woudn't normally see during this game...?
Well yeah, first, an embarassed Ueda lol

Nakamaru did the shōjo manga play lol It was cute XD
But this lady!

lol OK fine! Kame knows his prey and knows exactly how to win them over lol

Then how I said they were pouting...?
Well, more like Nakamaru was pouting... he really wanted to eat too and was really sulking. 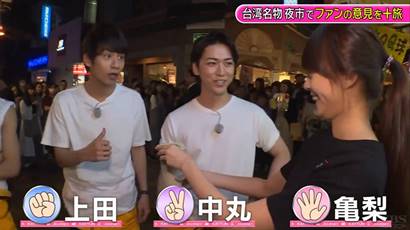 lol he was super surprised and happy that he won XD

Ikemen Janken 3
This was the a little different... I also had no idea who would win... but my bet was between Ueda and Nakamaru just because Kama's tactic was predictable.

I kept laughing at Nakamaru... was he worried because he was 'wooing' the shrine girl or did he just give up winning against Kame and Ueda? lol

Not even I saw that whisper in the ear coming but when it did - Oooooh boy! and Ueda's victory smug walking off was just too cool!

Really I loved this episode! They also make me want to visit Sendai now and eat these things...

And this shrine seems like a must visit if ever in Sendai! I'm happy they got a prayer said for them XD Yes please, I want all the luck for them from here on out ;)

Next episode will see men involved in this Ikemen Janken XD !