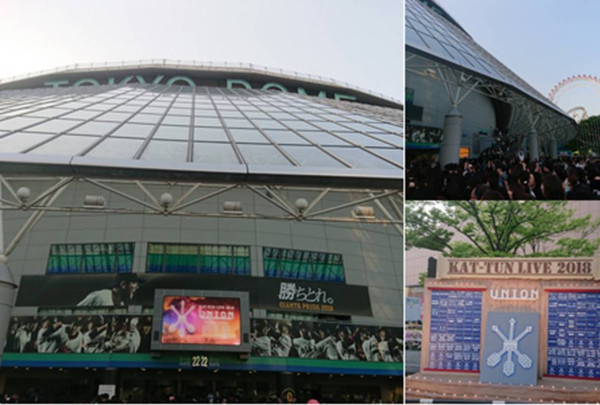 Over the weekend, my mother called me. Then while chatting, out of the blue she asked me, "what happened to that group you used to go stupid over and I had to beg you to shut up about them?"

"That's why I'm in Tokyo, mum. They have concerts".

She only then went, "Oh", in a tone like sounded like, 'oh, so you're still stupid over them'. lol

Guys, it's not a myth... absence does make the heart fonder. 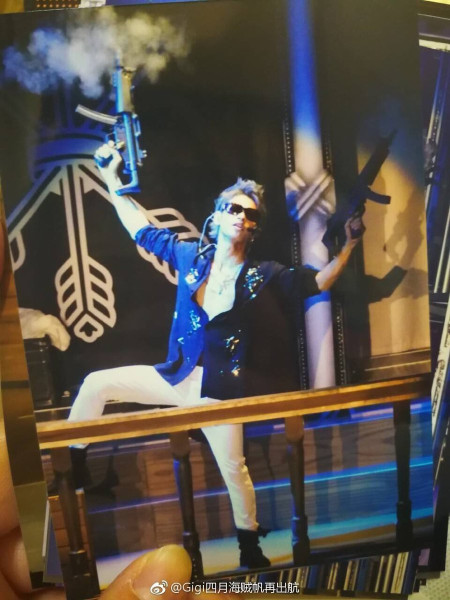 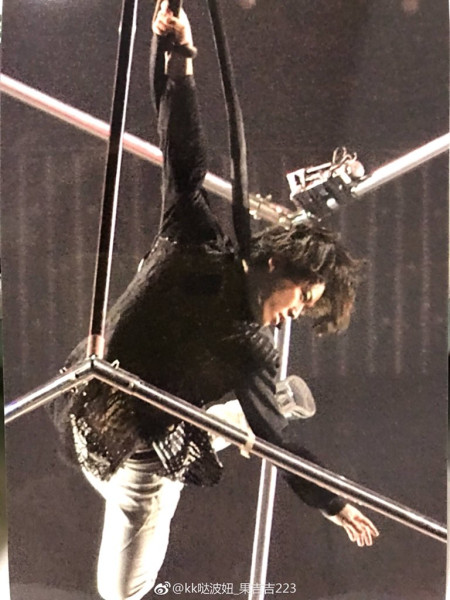 As usual, I rushed to the venue much to

crism79 texted me to say she and

As usual, please forgive my typos. I'm sure there will be many orz.

As soon as I hit the Korakuen Station for Tokyo Dome and saw all the HYPHENS, a rush of nostalgia hit me. That nostalgia was soon mixed in with excitement when I reached the Dome and saw the crowd and the goods stand and then heard the screaming people on the roller coaster and by the time I got in line to go inside, that nostagia and excitement was joined with anxiety and restlessness. I was telling

20102205k that if it weren't for her wanting to get in early, I would wait until the very last minute. Anyhow, we entered the Dome and as I walked through the tiny passageway to our seat and I saw the stage - the background of the ship - immediately, all that nostalgia and excitement and anxiety got flooded with memories from 2 years ago when I was there for a different reason - I'm not going to lie but when KAT-TUN finally came on stage, if I'd blinked then perhaps a tear would've left my eyes... because f*ck, they're really back!!!!

I got a good seat on Friday, I was literally centre stage and I was close enough to scout out Ueda's nipples lol (but let's leave that for later)

They're so dramatic and think they're Kings of the Universe.

Watching them walking down the stage during 'Kimi no Yume Boku no Yume', I had to smile... which is a strange reaction but immediately everything bad disappeared and I no longer associate that song with sadness but now with KAT-TUN's promise to each other and to HYPHENS. Ueda was walking down the aisle like 'I'm back bitches! I told you to wait for me, your badass hightness would come get you'... while Kame must have really thought he was on the Paris runway lol and Nakamaru walked down in full confidence like, "guys, it's been rough but we made it... we kept our promise and we made it back to you"... and my heart was happy and light like it was on a flight on roses and cotton candies.

I totally love the setlist! KAT-TUN totally rocked the songs... With 3nin, it's clear that they each have a role to play... it's a distinct role... not a beatbox or a rap role but a role in the songs and the group and I totally love how they shifted the focus between the members - they all had a turn being in the centre... being in the spotlight.

And I mean, Ueda danced his ass off. I mean, he put all his effort in there that I coudn't laugh too hard at his awkwardness lol... sooo fricking cute! 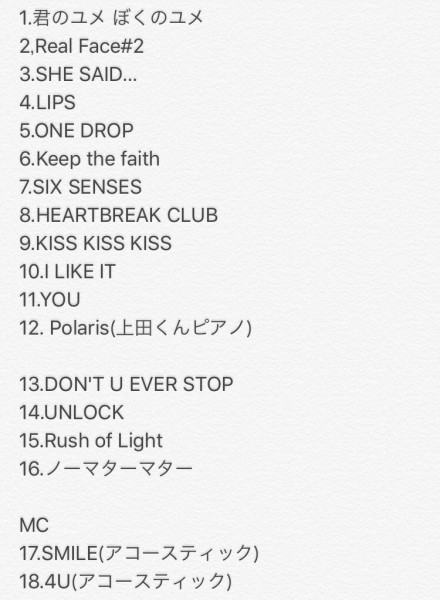 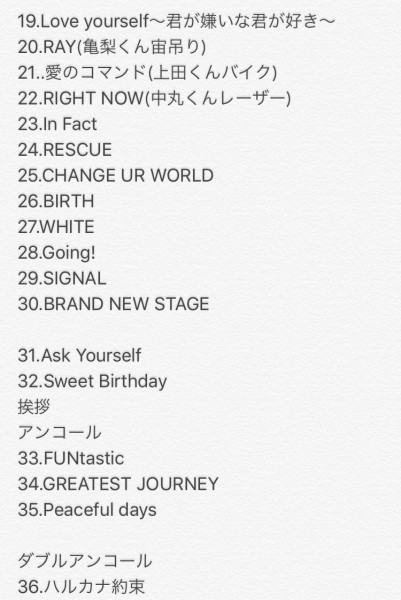 I think that while people enjoy a full concert, there will always be that one performance that you'll remember the most... and for me, that's 'Polaris'. Ueda is so talented on the piano and Kame's and Nakamaru's voices are soft and the beatboxing piece was art, everything about this performance was perfect and I kept thinking, 'wow, this is my KAT-TUN'. I also started thinking how I really still do wish for Ueda to get a solo concert because with this musical range/ability, he should be shown the world. This performance, also reminded me why I miss them on Shounen Club Premium...

But speaking of Ueda on the piano.... this gap of this dude is so wide... the rough gangster way he looks is so misleading... one second he's a refined pianist then not long after he popped out TWO (2) guns then rolled out on a motorbike like he's about to hold the world at ransom lol. His 'Ai no Comando' was a really cool performance... the way he was the lead but behind him followed a masked cthulhu doing really cool bike stunts. The crowd was screaming!

Kame's solo was 'Ray' and man.... oh my man was so extra! He did his regular acrobatic swings but with super heavy (AND SEXY) breathing and pretended to be falling and I laughed when I girl behind me screamed when Kame 'slipped' lol.

And Nakamaru was amazing with his laser lights with 'Right Now'. And watching the three of them joining in at the end, made me wonder just how long did they have to practice to get the timing right because they were really perfect.... it was like KAT-TUN owned all the colours in the world and on Friday while I was in Arena seats, the view was great, but it was all the more prettier watching from Stands on Sunday... this is why I need to attend concerts multiple times... the view changes depending on the seating. 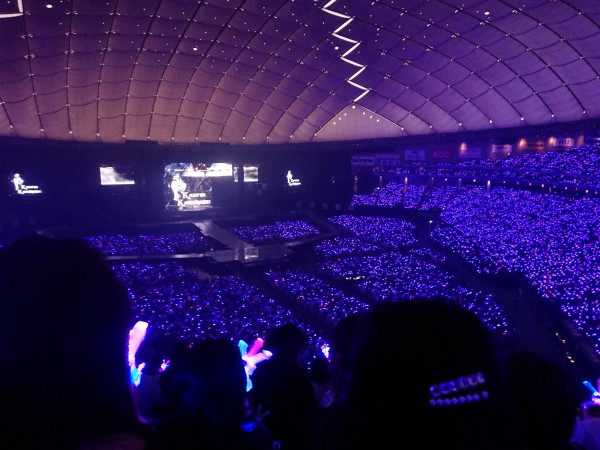 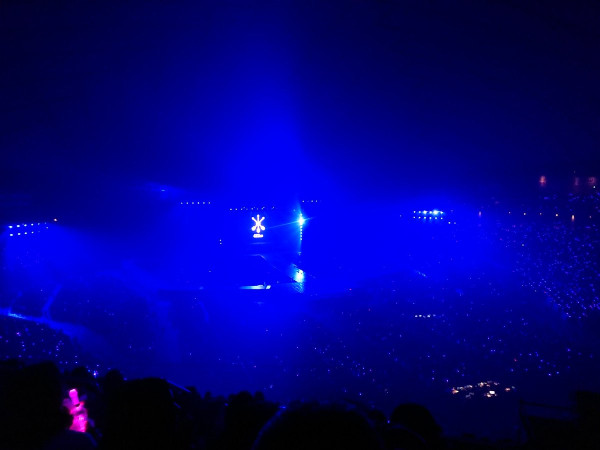 Okay, some other observations;

- I love how many people of all ages and sizes and of both genders attended - even Kame noticed the couples and he seemed amazed that the people who started following them grew from teenagers to university students to being married and now have kids... I think he was surprised that 16years had already passed lol (and he's actually old) hehe

- They song 'Rush of Light' and I nearly peed myself because I really love this song! They did quite a good bit of the songs from that very first 'Best of KAT-TUN' album.

- Ueda's nipples are glorious lol. On the first day I could spot them with my bare eyes... but on Sunday, I kept my eyes glued to the screens lol I swear, this guy might have wanted to walk around naked because not only his nipples showed but even his bare yummy shoulders. 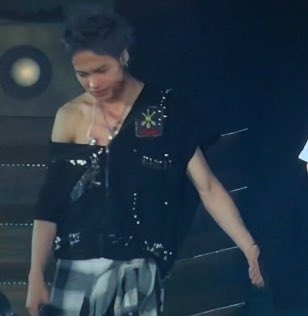 - During the closing remarks, Ueda spoke a lot. I think he spoke the longest on both days. Thanking Hyphens for sticking with them and asking us to stay with them  and celebrate next year's anniversary and the year after that. He's just too loveable. On Sunday, he said he loved Nakamaru and Kame and Nakamaru interrupted him to say he also loved Ueda and Kame and during Kame's time to chat.... I feel like the entire dome of 165000 + people were holding their breath waiting for Kame to say he loved them too and when he finally said it (because he's extra and overdramatic) everyone applauded then I think it was during the second encore, that Nakamaru said 'KAT-TUN is forever' and I think that just cleansed everyone's soul.

- I really want to know why KAT-TUN can dance in sync when with others but as a group they're a hot mess lol a cute hot mess. They danced really well with the juniors. Normally, I don't care for juniors but they aided KAT-TUN's aethetics this time so I like that XD... sorry I can't remember what song they danced to as a group but the choreography was good... good thing we'll get it all on DVD ^^

- Oh My GOODNESS!!!! Ten no Koe!!!!!! I was really happy when he showed up on Friday and also to officially announce the return of Tame Tabi! As usual he picked on Ueda, teased Kame about being Johnny's sex symbol and played Nakamaru after asking him to beatbox but as soon Nakamaru opened his mouth he stopped him with a 'Thank you' lol

- Ueda has some guy fans. I saw a young man cosplaying as Ueda. I'd seen this at GACKT's concerts but not at KAT-TUN's but this guy had the 'scars' on his hand and neck, wore his hat the way Ueda wears his, and even his hoodie was cut like Ueda's... so cute ^^

- On Friday, Kame kept asking us to smile. He really didn't want us to feel sad. I guess he felt our anxiousness especially after they came out for the second encore just before he announced the planned tour starting in summer, without meaning to, it sounded like bad news was coming (I just think Hyphens are paranoid--- and with good reason lol) and he was like, 'relax, I wouldn't just suddenly betray you like that'.

- Oh I should say, UNION picked up where 10Ks ended. You'll see what I mean when you watch the DVD. But they really did a well planned out concert guys!

- Extra Kame with his funny faces, removing his shades, clicking his teeth, sucking his finger... he's so lewd! He also did lots of grinding and I realised how much I'd needed Kame's grinding in my life lol

- I think it was to 'Sweet Birthday' they had a sweet dancing where they walked back up the stage doing some simple dance moves/foot work but it was really playful and it was great watching them... I never really check the lyrics for songs but it's only today that I realised that maybe 'Sweet Birthday' is KAT-TUN celebrating their own anniversary which is kinda what those dance moves were... very mellow but joyful and sweet and wow, I love that song and I love KAT-TUN!

- On Sunday, KAT-TUN came out for 3 encores and on the third encore, Kame called us selfish lol and Ueda kept punching at us in the camera and Nakamaru being, Nakamaru was like, "you father will be angry" lol I guess he thought 9pm was late and past curfew lol

Really, to think 3 members were able to full Tokyo Dome; on one hand it makes you think they never needed 6 members since the beginning but to be fair and logical, it's just like what Kame had said at 10Ks, all 6 members contributed to who and what KAT-TUN is today (the 6 built a foundation) XD

I had soooo much fun! I enjoyed Friday thoroughly but Sunday was GREAT! Something about Sunday was super FUNtastic! Maybe it's because by then the nerves had calmed but from KAT-TUN themselves to the audience... everyone was so happy and bouncy enjoying themselves... it was like this grand party that was two years in the planning was suddenly unleashed on Sunday and when it did, it was magical <3

But really, the moment I love the most will always be;