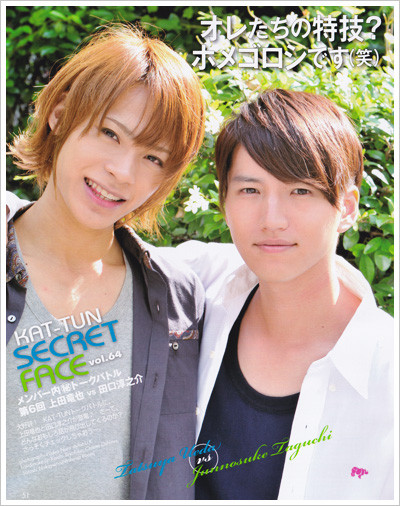 Taguchi: I’ve somehow been friends with Uepi for a long time now. When we were juniors, we often hung out together with Nakamaru.

Taguchi: After lessons were over, we were wandering around in Shibuya!

Ueda: Ah~ I somehow recall it now. At that time, you were always wearing your school uniform, right?

Taguchi: Yes, I wore gakuran [the typical black one] and also blazers. Though pretty soon after that, KAT-TUN was formed and when backdancing during the tours of our senpai, Uepi, Nakamaru-kun, Kame and Koki were in the Kinki group, while I and Akanishi-kun, being a bit taller, were in the V6 group… something like that happened often. That’s why during that time, we seldom worked together.

Ueda: Yes. But, you know~ Back then you totally didn’t have that image of saying gags like you always do now.

Ueda: Plus, I had the impression that you remembered the choreography really quickly. Yeah, your image back then was that you were really docile. I don’t know if you were shy around strangers, but you weren’t the type that was seriously exuberant.

Taguchi: True, I was docile. Now… I maybe got stronger in a lot of ways.

Ueda: You became bolder. No matter the situation, you keep your courage without getting timid. Even if your gags fail (laughs). But that is your weapon.

Taguchi: Uepi back then seemed to be really eccentric. Your fashion, as well as your hair style and the blond hair… But I recently often think that Uepi is serious at heart!!

Taguchi: Yes. Lately you’ve also been doing the choreographies…. before, it seemed like you weren’t doing them seriously, how should I say it? Not that you didn’t do them, but maybe that even among the members, you seemed more like an outlaw? But recently, I’ve been watching you intently and I think that your ability to concentrate on keeping balance is very good. Not just for choreographies, you’re actually always putting all you have into it.

Ueda: Well, I probably really don’t particularly show my serious side… But more than that, I’m concerned about always being watched by you? (laughs)

Taguchi: Oh, just when I looked a bit.

Taguchi: Nah, I just looked and thought about how you’re really serious. I just relax when I can (laughs).

Taguchi: Thinking about it, we didn’t go out eat together recently.

Ueda: Right. Oh yes, I totally remember how I used to go out eat with you. Hey, steak house owner! We asked for your input!

Taguchi: Ah, right! Wasn’t that about 6 years ago? Back then, we talked about stuff together we didn’t tell the other members, including private things. You saved me at that time, thank you.

Ueda: And do you remember how three years ago, Kame and I joined you in killing time?

Taguchi: Very much. We played billiards together and then I had something else to do, so we went different ways. You two went to eat someplace else. I took a taxi and with you two walking there, looking like you had so much fun, it was really frustrating.

Ueda: But originally Kame and I had been killing time with you?

Taguchi: Right, but the two of you were walking, all elated as lovers would do. I really thought, “I also want to go!!” (laughs).

Ueda: True, after that, we were still very excited.

Taguchi: Right? I still want to go. Ah, lately I’m in charge of changing your dog’s diapers …why don’t we go to a dog park?

Ueda: That sounds like fun. Recently, my dog and your dog had the chance to meet, so they also became friendly with each other.

Taguchi: Well then, let’s go to a dog park next! Different topic, but you and I haven’t done a lot of work together yet, right?

Ueda: Before, we often were together on the same location for the variety show, but halfway through, the teams got all mixed up. I maybe was fewer times with you than I thought. I wanna appear in a variety show.

Taguchi: There are those were they’re playing games of tag seriously, wouldn’t you want to be in one like that?

Ueda: Sounds good. Since I’m confident that I can keep running at the same speed, I think I’d get away.

Taguchi: It might look bad for me. But I’d flee using my head (laughs). Plus, I’d want you to definitely take test for professional boxing one day. I’d like you to continue holding your dreams.

Ueda: Yes. Didn’t you recently get the license for boat driving? Buy a boat! Do a cruising party!

Taguchi: I couldn’t buy one! How much do you think a cruising boat is! (laughs) Renting one is enough.

Ueda: Hahaha, for you, being peaceful really is the best, always stay this way. I really think you’re a valuable existence among the members.

Taguchi: Now I’m all embarrassed. How you’re cool and collected is also something that’s essential for KAT-TUN, so stay that way!!

Ueda: …U~n, somehow this turned into mutual praising in the end, which is pretty gross (laughs).